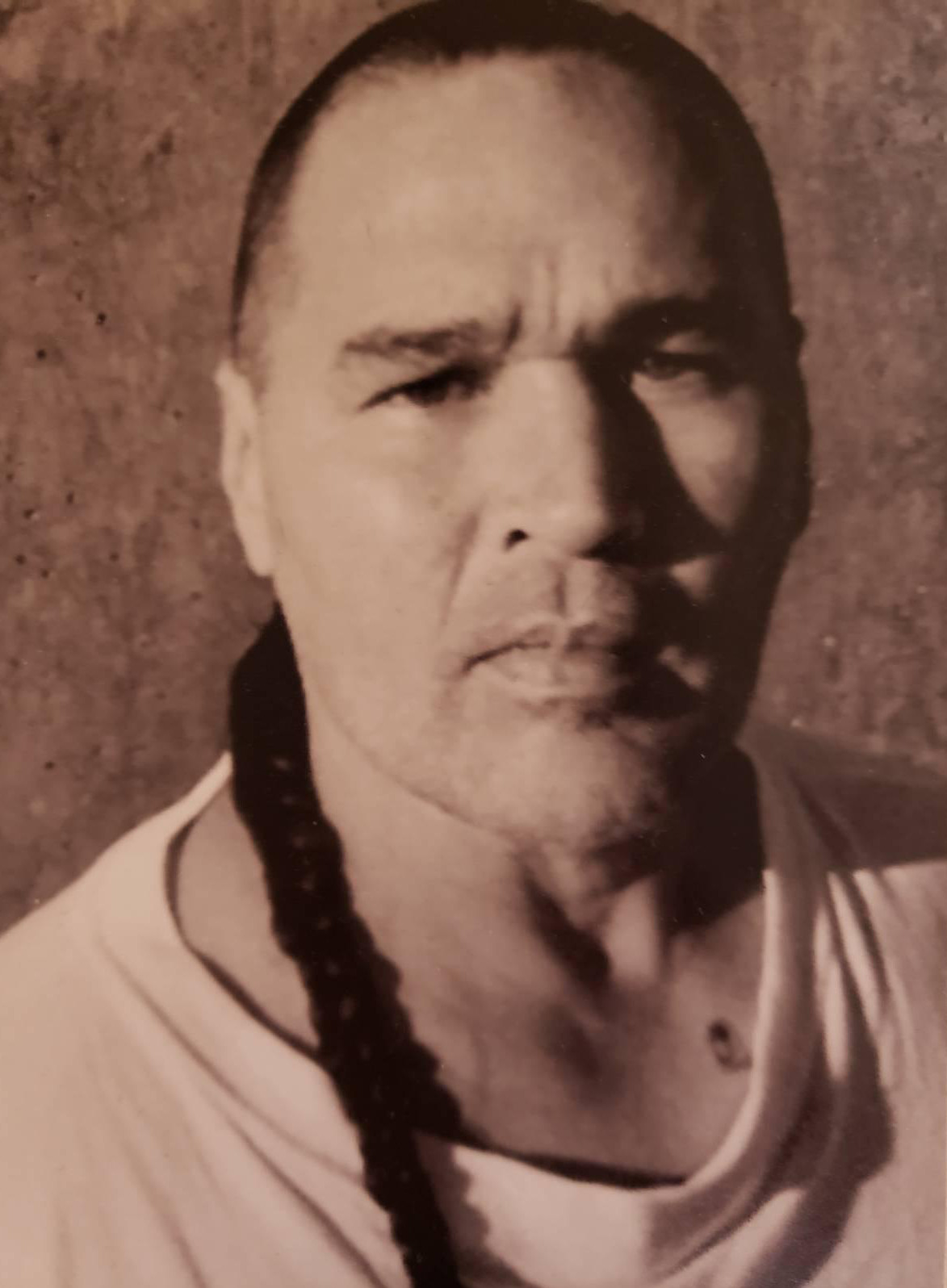 Oso Blanco is a native warrior.

While his Cherokee name is Yona Unega (White Bear), from growing up in New Mexico he is used to being called Oso Blanco (White Bear in Spanish). He is now serving 55 years in prison for bank robbery, aggravated assault on the FBI, escape and firearms charges. Oso Blanco defended himself from federal agents in a gun battle on August 13th 1999 at his home in Albuquerque, New Mexico. Although he escaped, he was arrested later that day. After being held just over a year in New Mexico State Penitentiary, he escaped from a prison transport van and almost immediately began robbing banks. He was recaptured a short time later. Oso Blanco never used a gun in any bank robbery, but he has a long history of living by the gun and will not hesitate to use it on the agents of repression or the occupiers of Aztlan whom force false laws on the true people of this land. He is not asking for monetary support– he’s only asking that people become aware of indigenous people’s issues. In an interview he expressed: “I am still able to hold my head up high and feel the gratification for my work in a world where money, power and destructive industries are regarded far above humanity, indigenous and impoverished peoples and cultures. I cannot help that I got deeply into my work…”

In August 13, 1999, two FBI agents investigating the series of bank expropriations came to Chubbuck’s apartment. The agents were interviewing Chubbuck’s wife when he entered. A shootout between the agents and Chubbuck erupted and he was able to flee. During the shootout, no one was injured.

Oso Blanco was found a little while later in an adjacent apartment with family members. The FBI surrounded the apartment and within a half hour, Chubbuck allowed the family members to leave unharmed. Chubbuck, however, bashed through the walls in the building to slip into adjacent apartments in an effort to escape. He went through two or three apartments before emerging more than two hours later. Chubbuck tried to run but captured after being shot with several bean bags and attacked by a police dog.

On December 21, 2000, Oso Blanco was being transported by the US Marshall’s service from Albuquerque Federal Court to Santa Fe County Jail, when, after unlocking his handcuffs, kicked out the back window of the prison transport van.

He spent some time in Mexico after the escape, and then continued to expropriate funds from U.S. banks to send to Chiapas. Authorities believe he expropriated funds from about eight banks after his self-liberation. He was placed on the "15 most wanted" fugitive list.

On February 7, 2001, Oso Blanco was recaptured while unarmed after wounded by gunshots from thr Albuquerque police to his back and face.

In the end, he was accused of expropriating funds from about 20-22 banks. He was convicted on 14 of those charges. It is estimated that he expropriated at least $165,000.

Not everyone in life gets a moment to stand for a relevant purpose that may leave a great impact on this earth.

[Oso Blanco] obtained [the alias ‘Robin the Hood’] very remarkably from robbing banks, this was to supply necessities to a very poor culture in Mexico.nIt truly identifies the almost unbelievable past that is part of his being labeled an ‘outlaw.’

He is a man of high spirits, courteousness, program-oriented, ambitious, and compelling.

This is a man who has voyaged deeper than previous explorers have ever done, taking a practical, adventurous, trans-personal element in himself for a synthesized cause beyond the implications toward leading his predecessors with understanding and consciousness for a just cause, without personal gain or selfishness…

This is a man who stands for great purpose, and I don’t blame anyone who feels that he had every right to stand as strong, confident, and content as he stands.

I walk alongside my brother, mentor, and friend, Oso Blanco, every day, and there something always to be learned while conversing with him.

We are in an environment where it is far to easy to lose hope as well as yourself. Oso Blanco exemplifies positivity, strength, and an aspect of righteousness in his everyday actions, along with his unique character of being one who is steadfast in standing firm on moral and principle, through which he supplies the hopeless with hope, and helps shape the society in which we are currently living for the betterment of all.

Being conscious of the Almighty and the plight of humanity, Oso Blanco strives to enlighten and to advocate sobriety amongst the prisoners he encourages.

Recognizing the imbulance of the having and having not, Oso Blanco treats everyone with equality, generosity, and respectable courageousness that identifies his many characteristics and also his mannerisms.

Never being a man to back down from truth or compromise, nor being one to censor himself due to the wishes of authority, he speaks his mind and expresses his beliefs to all who will listen to his views and ways of understanding life.

I am very impressed with his plight (struggle) overall and how he has actually helped to give many a distinctive outlook when it comes to a person bettering himself.

Though there are many of us men being held under this state of crisis in these current moments, I must admit that while living caged up like this we discover that it is having men like Oso Blanco around aids us with the assurance that we are still free.

I am set free by the positivity that men like him continue to provide us with when we are found without the strength to continue our journeys. I would never return to a place like this, and am honored to have met a man who knows how to encourage the mind with his concern, his heart, for humanity.

He is a very understanding person who exposes that it should not be difficult to grasp a passion to improve the conditions of forgotten people, no matter their creed or race.

This is a person who possesses an enjoyable nature toward a precious way of thinking and who is determined to lead many in the stand for this planet’s survival. I’ve never encountered one who speaks about the Earth and the entire world as he does, with the love he holds for both.

I am extremely proud to state that Oso Blanco is 100% a revolutionary comrade and I would stand beside him. I am also impressed by how he has not allowed his present position to destroy his stout and hearty being; despite a prison sentence of over 20 years and counting, it has not transformed him into anything other than the peace that this planet need to exist in.

His spirit and soul illuminate the rooms with bright aspirations that light the paths for those whom are lost. I conclude this in the same spirit that I have absorbed from being around his own positivity. I began this letter with the same positivity that he has provided to many of us in the realm of captivity. This is the energy and power that we supply one another with to continue positive thinking.